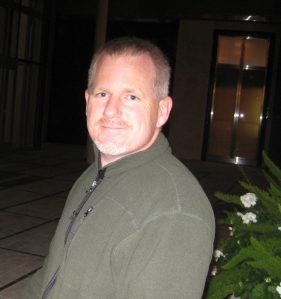 Raised in southern California, Chris Riley moved to the Pacific Northwest for college, where he quickly grew accustomed to the colder climate. Since college, he has worked through a variety of careers, until becoming a school teacher for students with special needs. Ambition not yet quenched, he began an additional career in writing, and has had nominal success with the short form markets, before delving into the longer narrative.

Chris’ debut novel, THE SINKING OF THE ANGIE PIPER, is a coming-of-age story about an Alaskan crab fisherman who learns what it takes to be a man from his best friend with Down’s syndrome. Compared to as both “literate and heart-pounding,” the novel combines the elements of human survival, forgiveness, and tear-jerking triumph, against a backdrop of the harsh, Alaskan seas.

Currently, Chris lives in central California with his wife and children, hiding from the heat, and slowly unearthing his next novel. He vows one day to return to the Pacific Northwest.

Chris is represented by:

THE SINKING OF THE ANGIE PIPER